GROTON, Conn., Nov. 17, 2011 — After 10 years of war, the Unit­ed States is at a turn­ing point in its nation­al defense, Defense Sec­re­tary Leon E. Panet­ta said today while vis­it­ing sailors and ship­yard work­ers here.

“The real­i­ty is that after 10 years of war, we’re begin­ning to see the results of a lot of sac­ri­fice on the part of our men and women in uni­form, [and] on the part of all the peo­ple that are part of our nation­al defense,” Panet­ta said. As the mil­i­tary draws down its remain­ing forces in Iraq, with all out by year’s end, the sec­re­tary said, the Unit­ed States met its goals there.

“The mis­sion there was to estab­lish an Iraq that could gov­ern and defend and secure itself, and we have accom­plished that mis­sion,” he said. “Now it’s up to Iraq to be able to secure and gov­ern itself. We’ll give them assis­tance; we’ll con­tin­ue to work with them. The real­i­ty is that they’re on the right track.”

Progress also is being made in Afghanistan, Panet­ta said.

“In Afghanistan, we’re hop­ing that we can move in the same direc­tion,” he said. “We’ve weak­ened the Tal­iban; we’ve had the low­est vio­lence lev­els in Afghanistan in five years.”

“We’re begin­ning to secure key areas of that coun­try,” he added, not­ing the growth of the Afghan army and police.

“We are mov­ing in the right direc­tion,” Panet­ta said. There remains “a lot of work to be done” before all secu­ri­ty reverts to the Afghans in 2014. Hope­ful­ly, he said, “we’ll be able to, again, have an Afghanistan that can gov­ern and secure itself.”

Address­ing ter­ror­ism, Panet­ta stressed the impor­tance of keep­ing pres­sure on the enemy.

“The real­i­ty is, we’ve dec­i­mat­ed al-Qaida’s lead­er­ship … [and] we have tak­en down key peo­ple, includ­ing bin Laden and oth­ers,” he said. “The result of that is that this coun­try is safer by virtue of what we’ve been able to do.”

U.S. nation­al secu­ri­ty is mov­ing in the right direc­tion because of the sac­ri­fices of many peo­ple, he said, but still faces threats.

Panet­ta also not­ed the “ris­ing pow­ers” of Chi­na and India. He said his and Pres­i­dent Barack Obama’s recent vis­its to the Pacif­ic region were to ensure “we always have suf­fi­cient force pro­tec­tion out there in the Pacif­ic to make sure they know we’re nev­er going anywhere.”

“So when you look at the world that we’re deal­ing with, we still have a lot of threats,” he said. “And add to that, the chal­lenge of now hav­ing to reduce the defense bud­get ï¿½ we’ve got a huge deficit in this country.”

Despite fis­cal chal­lenges, Panet­ta vowed to “not break faith” with the mil­i­tary and pre­vent a hal­low­ing out of the force. 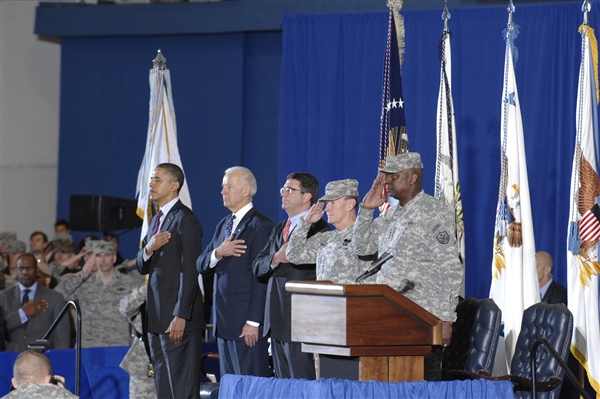 Austin: ‘It’s Great to be Back’ From Iraq