ISLAMABAD, Pak­istan, Sept. 2, 2010 — Though relief efforts may help peo­ple in flood-rav­aged Pak­istan and the rest of the world see the Unit­ed States in a more favor­able light than they had before, the U.S. objec­tive here sim­ply is to help, the chair­man of the Joint Chiefs of Staff said.

Navy Adm. Mike Mullen is in Pak­istan today to meet with gov­ern­ment and mil­i­tary offi­cials and to get a first-hand look at strick­en areas and the relief effort with Gen. Ash­faq Parvez Kayani, the Pak­istani army’s chief of staff.

Dur­ing the first trav­el leg of an over­seas trip that has brought him to Ger­many, Iraq and Pak­istan this week, Mullen said the rela­tion­ship between the Unit­ed States and Pak­istan suf­fered for more than a decade. Though a strate­gic U.S.-Pakistani part­ner­ship has re-emerged, he added, it will take time for the Unit­ed States to rebuild the Pak­istani people’s trust, and the flood-relief effort can help in that regard.

“The back­drop of this is 12 years of no rela­tion­ship and a mas­sive gap of trust,” he said. “It’s just going to take us a while to rebuild it. How­ev­er long you take to dig a hole, it’s prob­a­bly going to take you that long to fill it up.”

Mullen not­ed that the per­cep­tion of the Unit­ed States among Indone­sians improved as a result of the tsuna­mi relief effort in 2004.

“The goal was to help,” he said. “The effect was that so many changed their minds about their feel­ings toward Amer­i­ca. That’s not why we do it, but the pos­si­bil­i­ty is there. I’m hope­ful that many Pak­istani cit­i­zens can see a dif­fer­ent side of Amer­i­ca than what is often portrayed.”

The stand­ing of the Unit­ed States among the Pak­istani peo­ple isn’t very high, Mullen acknowl­edged, adding that he hopes the flood-relief effort helps to build good will. “With this relief and assis­tance,” he said, “I hope they will see – sim­i­lar to the earth­quake there in 2005 – that this is who we are.”

En route here last night, the chair­man said he spoke ear­li­er in the day with Dr. Rajiv Shah, admin­is­tra­tor of the U.S. Agency for Inter­na­tion­al Devel­op­ment, about Pak­istan flood relief, “because we’re all try­ing to work this together.”

Mullen told reporters the flood waters have reached the Indi­an Ocean, so they’re no longer ris­ing. As the waters recede, he added, the extent of the dam­age will become more evi­dent. The long-term scope of the relief and recov­ery effort Pak­istan will need remains to be seen, Mullen said, but the U.S. com­mit­ment to that effort is clear, and a sig­nif­i­cant, sus­tained com­mit­ment from the inter­na­tion­al com­mu­ni­ty almost cer­tain­ly will be required.

For now, the chair­man added, the focus is on the near term. Addi­tion­al U.S. heli­copters and ships should arrive in about 10 days, he said. So far, he added, the Unit­ed States has res­cued more than 11,000 peo­ple, brought in more than 3 mil­lion pounds of relief sup­plies and pro­vid­ed Pak­istan with about $150 mil­lion in aid.

More news and arti­cles can be found on Face­book and Twitter. 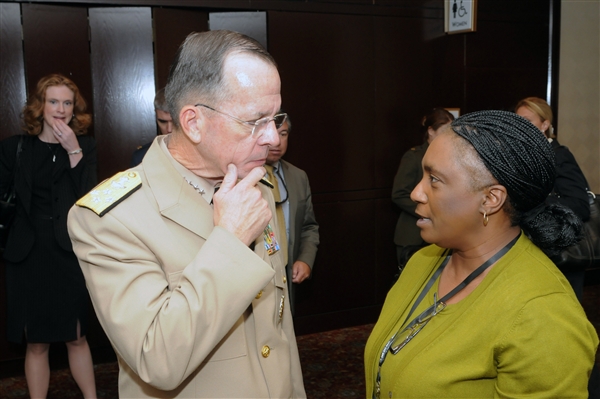