CAMP LIBERTY, Iraq, April 22, 2011 — The U.S. mil­i­tary needs to get it right as it tran­si­tions out of Iraq, the chair­man of the Joint Chiefs of Staff told sol­diers in Bagh­dad today.
Navy Adm. Mike Mullen spoke to sol­diers and air­men assigned to the 25th Infantry Divi­sion and the 1st Infantry Division’s 2nd Brigade at U.S. Divi­sion Cen­ter head­quar­ters here.

About 47,000 U.S. troops remain in Iraq, most­ly in an “advise and assist” role. With all Amer­i­can troops due to leave by the end of the year, Mullen called on the ser­vice mem­bers to make sure “we get every­thing right in this transition.”

What they do will give Iraq a chance to have a bet­ter future with a mil­i­tary that is under civil­ian con­trol, and have a force that is “respon­sive, capa­ble, able to take care of their own peo­ple, their own bor­ders and their own secu­ri­ty,” the chair­man said.

The change in Iraq pre­saged the sea change in the Mid­dle East, Mullen said, and that “adds that much more crit­i­cal­i­ty toward get­ting it right in Iraq.” The Iraqi gov­ern­ment and peo­ple now have the main job in estab­lish­ing a peace­ful, sta­ble gov­ern­ment, but U.S. troops have a sup­port role to play, he added.

Nations around the region are try­ing to fig­ure out how to put in place all that is nec­es­sary to have a democ­ra­cy, in an area with lit­tle or no demo­c­ra­t­ic tra­di­tion, the admi­ral not­ed. “And Iraq is at the heart of that,” he said. “I’m delight­ed that most of the chal­lenges here now are polit­i­cal,” and not military.

The world is unpre­dictable, the chair­man said, not­ing that strange­ly, that will be a con­stant for the future. For exam­ple, he said, he had no idea in Jan­u­ary that Japan and Libya would be the coun­tries he would be most con­cerned about in March.

The tem­po of deploy­ments will drop, and troops will soon be home twice as long as they are deployed, he said. But giv­en the unpre­dictabil­i­ty in the world, no one can afford not to be ready to respond at a moment’s notice. “We’re going to con­tin­ue to deploy,” he said. “We don’t nec­es­sar­i­ly know where.”

The Unit­ed States is look­ing for a long-term strate­gic part­ner­ship with Iraq, Mullen said. “The details of what that means — whether there will be train­ers here, or what the num­bers will be, if any at all – are yet to be worked out,” he added.

With the reduc­tion in tem­po, sol­diers will have more time in gar­ri­son, and that will mean a new set of chal­lenges, the admi­ral said, not­ing that much of the Army has not spent sig­nif­i­cant amounts of time at home stations.

Senior offi­cers and non­com­mis­sioned offi­cers know what it’s like to be in gar­ri­son, the admi­ral said, and they now have the extra respon­si­bil­i­ty to instruct oth­er ser­vice mem­bers on what being in gar­ri­son is all about, such as how train­ing is accom­plished and what the rules of dis­ci­pline are.

In this era of bud­getary con­straint, get­ting the “peo­ple” por­tion of the bud­get right is most cru­cial to the long-term health of the force, Mullen said. After almost 10 years of war, he not­ed, this is the most com­bat-expe­ri­enced force in America’s his­to­ry, and it’s impor­tant for the mil­i­tary to retain that sea­soned force.

“If we don’t do that, it will be dif­fi­cult, no mat­ter what our bud­get is or the stuff we’re buy­ing,” he said. 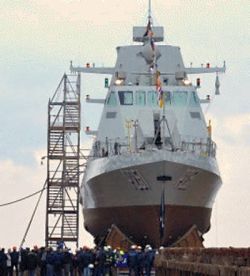 USA — US Military contracts for FY10