KUNAR PROVINCE, Afghanistan — “I can say that I’ve led this pla­toon into more ambush­es than any oth­er point man here on this deploy­ment,” Army Sgt. Nathaniel S. Gray said with a toothy grin and a slow, south­ern accent.
“I was point man for the first six, sev­en months here,” he con­tin­ued. “I walked us into a lot. I can smell it, but I don’t know where it’s at. I know it’s going to hap­pen. Every time we were walk­ing, I was look­ing for my next cov­ered and con­cealed posi­tion. You know, I’d look at this rock, then that rock. ‘Oh, there’s anoth­er rock, that’s where I’m going.’ I just nev­er knew when it was going to hap­pen.”

Gray, assigned to the 101st Air­borne Division’s Com­pa­ny B, 1st Bat­tal­ion, 327th Infantry Reg­i­ment, Task Force No Slack, now is a squad leader and has an uncan­ny knack for get­ting him­self and his team out of tight spots. Even before join­ing the Army, Gray found ways out of poten­tial­ly hairy situations.

He grew up in Tupe­lo, Miss., a town about the same size as Asad­abad, the cap­i­tal of Afghanistan’s Kunar province, where he now patrols. As a teenag­er, he watched war movies and idol­ized the men in those action roles who wore Scream­ing Eagle patch­es on their shoulders.

After return­ing from his first com­bat tour in Iraq, he quick­ly joined the 101st Air­borne Divi­sion and deployed again to Iraq with the division’s 3rd Brigade Com­bat Team for 15 months.

“Make sure you know where it’s com­ing from before you shoot, know what I mean?” Gray said to the sol­dier. “I expect a rock­et-pro­pelled grenade to come from that ridge­line over there.”

It was qui­et for a few min­utes as the sol­diers scanned the ridges with their weapons. Then Gray said, “Actu­al­ly, it’s my sons’ birth­days today.”

Jacob and Joseph, twins, turned 5 years old March 16. Gray said he sent home a bow and arrow set for their presents. He start­ed laugh­ing. “Last time I was home, one of them was walk­ing around the gas sta­tion we were at singing the Pledge of Alle­giance,” Gray said. “I thought that was pret­ty cool.”

Gray said his sons are one of the main rea­sons he has stayed in the Army. He is able to care for them, he added, but they also look up to and admire him for being a sol­dier. “They want cam­ou­flage stuff — you know, they’re 5,” he said with a smile. “They want the GI Joe back­pack, and I think that’s pret­ty cool.” Then he explained the dif­fer­ence between being a squad leader and a father.

“Over here, a squad leader is more dif­fi­cult than tak­ing care of kids,” Gray explained. “Here, you have to check to make sure their mag­a­zines are full, their [com­bat optics] are tied down — you have to check every­thing. Small things have big­ger con­se­quences over here.” Since join­ing the Army, Gray said, he has learned it’s the lit­tle things that count.

“The Army changed my life a lot,” he said. “It kind of dis­tilled some­thing in me. I start­ed doing the right thing. I respect myself more, and I respect oth­ers more.” After dodg­ing as many more ambush­es as he can in his three years left in the mil­i­tary, Gray said, he plans on going to col­lege and walk­ing into one more ambush: being swarmed by children.

“I want to be a kinder­garten teacher,” he said. The fight­ing posi­tion on the moun­tain was qui­et for a moment, and then erupt­ed with muf­fled laugh­ter from his troops. “Every­body laughs, but that’s what I want to do,” Gray said. “I love kids.”

A few days lat­er, back home in Mis­sis­sip­pi, Jacob and Joseph got a phone call. Their dad was on the line, far away from them, but reas­sur­ing them that he found a safe route off the mountain.

Gray has a cer­tain knack for that. 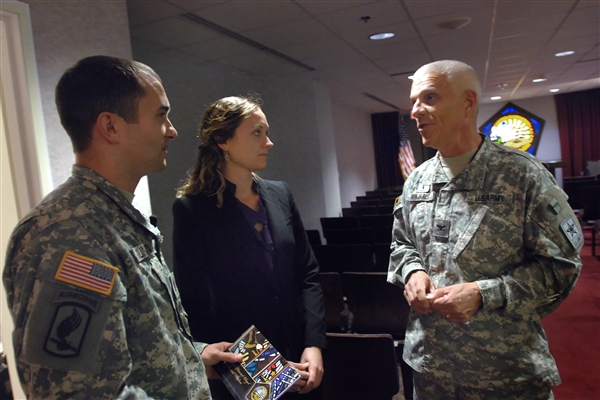