After mak­ing pre­pared remarks to about 300 sol­diers at this post about 20 miles from Korea’s demil­i­ta­rized zone, Gates opened the floor to questions.

Gates replied that he approved the idea of “tour nor­mal­iza­tion” in South Korea a cou­ple of years ago. “What we’re look­ing at is a two-year tour for sin­gle mem­bers of the ser­vice and three-year [tours] for fam­i­lies,” he said. “We’re pro­ceed­ing with the first phase in terms of families.”

It’s a long-term process, the sec­re­tary explained, part­ly because greater num­bers of com­mand-spon­sored fam­i­lies means more infra­struc­ture is need­ed to sup­port their needs.

“We think the cir­cum­stances are such … that this is a place where Amer­i­can fam­i­lies would be com­fort­able and would be safe,” he said, “and would make the ser­vice of our men and women in uni­form more bear­able for the families.”

Army Gen. Wal­ter “Skip” Sharp, com­man­der of U.S. Forces Korea, point­ed out to Gates that the deci­sion has begun to have an effect. Two years ago, about 1,600 U.S. mil­i­tary fam­i­lies were liv­ing in South Korea, a num­ber that has reached more than 4,200.

“Even up here at 2nd Infantry Divi­sion, they have about 600 fam­i­lies that are com­mand-spon­sored right now,” Sharp said. “[We’re] mak­ing sure that we build the infra­struc­ture in order to be able to have even more fam­i­lies come, to the point where we can even­tu­al­ly allow all fam­i­lies to come, to get to about 14,000 fam­i­lies [in South Korea].

Gates said he believes Casey expects that as stress on the force comes down with draw­downs in Iraq and upon reach­ing the autho­rized strength in Afghanistan, the Army can go to one-year com­bat tours fol­lowed by two years at home sta­tions, and then work from there toward a 1‑to‑3 ratio.

“And I know that it is his goal, once we’re not involved in these two wars simul­ta­ne­ous­ly, to be able to get to nine-month deploy­ments, which would obvi­ous­ly be a lot eas­i­er on troops and their fam­i­lies,” Gates said.

Gates, who had begun his for­mal remarks by offer­ing his thanks to the sol­diers for their ser­vice and to their fam­i­lies for sup­port­ing them, took time after the ques­tion-and-answer ses­sion to shake hands with each sol­dier, pose for pic­tures with them, and present them with his com­mem­o­ra­tive coin.

The sec­re­tary lat­er met with Defense Min­is­ter Kim Tae-young in the South Kore­an cap­i­tal of Seoul, and tomor­row he’ll join Sec­re­tary of State Hillary Rod­ham Clin­ton in Korea’s demil­i­ta­rized zone. The two Cab­i­net offi­cers are vis­it­ing South Korea this week to par­tic­i­pate in the first “Two-plus-Two Talks” between the long-time allies. 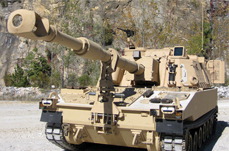