WASHINGTON, June 23, 2011 — Defense Sec­re­tary Robert M. Gates has served for four-and-a-half years — longer than all but four of his pre­de­ces­sors — but he still has some unfin­ished busi­ness.

“One of the advan­tages of the MRAP is, com­pared to the first year I was in this job, the burn unit is almost emp­ty,” he said. “So many of these kids were get­ting hor­ri­bly burned in the Humvees. The last time I was in Brooke there was no one to see in the burn unit.

“It may be the worst ride in the world — I think it may be like an old buck­board,” he con­tin­ued. “But it has saved lives.”

Fis­cal chal­lenges remain for the depart­ment. Health care costs are sky­rock­et­ing — from $19 bil­lion in fis­cal 2001 to $51 bil­lion this year. “It’s eat­ing the depart­ment alive,” Gates said.

He does­n’t dis­agree with those who say the sig­nif­i­cant­ly low­er cost of the TRICARE mil­i­tary health care plan for work­ing-age retirees is one of the ben­e­fits of their ser­vice. But nobody made any promise that it would nev­er change, the sec­re­tary said. Annu­al pre­mi­um costs for work­ing-age retirees could go to $520 from $460 and then be indexed to keep the costs at one-sev­enth, one-eighth or one-ninth what their civil­ian coun­ter­parts pay for health plans, he said.

“I’ve got no prob­lem with retirees pay­ing a frac­tion as part of their ben­e­fit, but there’s noth­ing to say it has to stay at the same dol­lar fig­ure for­ev­er,” Gates said. “The depart­ment sim­ply can’t afford it. There’s just no two ways around it.”

Rumors have the depart­ment chang­ing ser­vice mem­ber com­pen­sa­tion as part of its belt-tight­en­ing, but this is not true, Gates said.

“I’m actu­al­ly more intrigued by some of the pos­si­bil­i­ties on retire­ment and on work­ing-age retiree health care than I am on com­pen­sa­tion,” he said. “The truth is, the retire­ment sys­tem as it exists today real­ly is not fair to about 70 to 80 per­cent of the force, which does not [serve the length of time nec­es­sary to] retire.”

The sys­tem also works against good per­son­nel process­es, Gates not­ed. Lieu­tenant colonels or Navy chief pet­ty offi­cers are at the top of their games at the 20-year mark of their ser­vice, he said, with excel­lent skills and an enor­mous abil­i­ty to con­tribute. “We make it impos­si­bly attrac­tive for them to retire,” he said.

But any change to retire­ment would have to be grand­fa­thered, Gates said, so no one in the ser­vice today is affected.

In addi­tion, the sec­re­tary said, there should be some­thing for the 70 to 80 per­cent of those who serve and walk away with noth­ing — a 401(k) for example.

“When they leave at five or 10 years [now], they walk out the door emp­ty-hand­ed,” he said. “What kind of reward is that? This is where we are behind the entire pri­vate sector.”

With his own retire­ment near­ly at hand, Gates said, he may not be in office when the process of imple­ment­ing repeal of the law that bans gay men and les­bians from serv­ing open­ly in the mil­i­tary reach­es the point of cer­ti­fi­ca­tion that the mil­i­tary is ready.

“On ‘Don’t Ask, Don’t Tell,’ I’ve basi­cal­ly told the ser­vices to keep mov­ing,” he said. “We want to do this as fast as we pos­si­bly can. I don’t want to rush it just so I can sign it. I also don’t want to push it off so I don’t have to sign it. I’m basi­cal­ly let­ting the process go, and if it’s ready for me to cer­ti­fy before I get out of here, I will. If it’s not ready, that will fall to my successor.”

Dur­ing his last vis­it to Afghanistan as defense sec­re­tary, Gates met in town hall-style gath­er­ings with troops — some­thing he did­n’t do dur­ing his first two years in office.

“I always felt they were staged, and I did­n’t think I’d get can­did ques­tions,” he explained. “The one thing I have nev­er been will­ing to do in this job is use troops as props.

You’ll nev­er find me in an event with troops behind me on the stage. It always makes me ner­vous. Anoth­er thing I don’t like about town halls is how long they have to be there before I get there. They’d rather be in bed.”

Gates gets can­dor from lunch­es he has with junior ser­vice mem­bers at bases at home and abroad. He gets ques­tions and com­ments that run the gamut from per­son­al to gen­er­al. “I heard from an E‑2 whose wife stepped on a nail and was refused treat­ment at a mil­i­tary facil­i­ty because she was­n’t on TRICARE Prime or some­thing,” he said. “I went absolute­ly nuts when I got back home, and I think we got that prob­lem fixed.

“The fun­ni­est one I’ve heard about a num­ber of times is the weak crotch­es in the [Army com­bat uni­forms],” he added. “I loved the com­ment one of the kids made. He said, ‘You know, it’s not too bad in the sum­mer­time, but in the win­ter, it can get to be a problem.’ ”

The lunch­es are total­ly off the record and no one from the chain of com­mand attends.

“That real­ly rubs them raw,” Gates said. “But they real­ly have noth­ing to wor­ry about. In four-and-a-half years, I’ve nev­er had a kid say some­thing neg­a­tive about his commander.

“I am more can­did with these young peo­ple than I am with any­one else,” he added. “It’s because I trust them and believe in them. They are the only thing I will miss about this job.”

(EDITOR’S NOTE: This arti­cle is the third of a four-part series.) 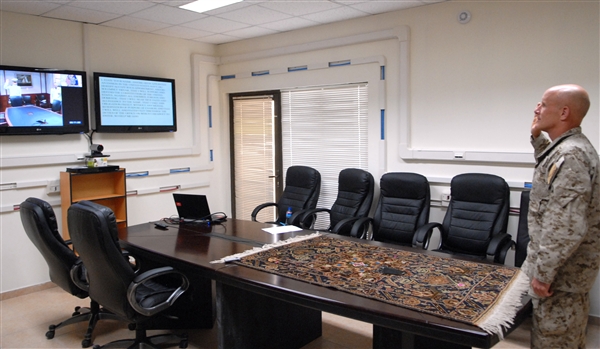