WASHINGTON, May 3, 2011 — When Wendy Duff­man first heard that Osama bin Laden, al-Qaida’s leader and the mas­ter­mind behind 9/11, was dead, she felt a sense of ela­tion, then relief.
Her broth­er, Air Force Tech. Sgt. Scott Eric Duff­man, died four years ago in a heli­copter crash in Afghanistan — a war launched in the wake of the dead­ly ter­ror­ist attacks. And as an Amer­i­can Air­lines flight atten­dant in 2001, she lost friends and col­leagues on the planes that crashed into the Pen­ta­gon and Twin Tow­ers, and onto a field in Penn­syl­va­nia.

“I woke up for the first time in four years feel­ing like my broth­er did­n’t die in vain,” Duff­man said.

The news of bin Laden’s death May 1 set off an emo­tion­al chain reac­tion across the nation. As the pres­i­dent pre­pared to brief the nation, hun­dreds of peo­ple gath­ered in front of the White House to cel­e­brate the news and dis­play their patri­o­tism, wav­ing Amer­i­can flags and singing the nation­al anthem. Since then, social media net­works have lit up with cel­e­bra­to­ry comments.

The reac­tion has been some­what more sub­dued among sur­viv­ing fam­i­ly mem­bers who lost a loved one on 9/11 or in the sub­se­quent and relat­ed wars. While elat­ed at bin Laden’s death, Duff­man said, she feels it’s a “small victory.”

“I don’t want peo­ple to for­get there are oth­ers like bin Laden,” she said. “The war isn’t over. We still have troops in harm’s way.” Many sur­vivors have mixed emo­tions about the news, said Ami Neiberg­er-Miller, spokes­woman for the Tragedy Assis­tance Pro­gram for Sur­vivors, a sup­port group for sur­vivors of fall­en mil­i­tary loved ones.

Neiberg­er-Miller not­ed that some peo­ple have talked of a sense of clo­sure because of bin Laden’s demise. Yet, “there’s not a sense of real clo­sure; you can’t have clo­sure from some­thing like this,” she said.

Lisa Dolan under­stands that first­hand. Her hus­band, Navy Capt. Bob Dolan, was killed in the Pen­ta­gon on 9/11 when Flight 77 struck the build­ing. The news of bin Laden’s death seemed sur­re­al at first, Dolan said, then bittersweet.

“Noth­ing will bring back my hus­band and the almost 3,000 men, women and chil­dren that were killed on Sept. 11, 2011,” she said. “Is there some vin­di­ca­tion in the death of bin Laden? Maybe. How­ev­er, I do feel incred­i­bly proud of our mil­i­tary. They have sac­ri­ficed so much for our freedoms.”

Dolan’s son, Beau, was at col­lege -– he’s a fresh­man at Notre Dame — when he heard the news. At first he felt “dumb­struck,” he said. Then, “I start­ed to real­ize how great it was, [and] the feel­ing of being dumb­struck trans­formed into sheer excitement.

“I could­n’t believe that it was final­ly over,” he said. “There seemed to be a chap­ter that had been final­ly fin­ished in my life.” In a dis­play of uni­ty, scores of stu­dents ran up and down the cam­pus “quad” chant­i­ng “USA” and singing patri­ot­ic songs, he recalled. “It real­ly was an awe­some expe­ri­ence and dis­play of love for the coun­try,” he said. Dolan’s daugh­ter, Rebec­ca, is cou­pling her excite­ment with caution.

“I’ve always had it in my mind that Osama bin Laden … might always be there loom­ing,” she said. “I’m excit­ed to think that there is one few­er ter­ror­ist out there. I also feel that there is still work to be done — that bin Laden’s death does not sig­nal the end of ter­ror­ism as we know it.” .

Trish Law­ton also is con­cerned about the reper­cus­sions of bin Laden’s death. “It’s a lit­tle scary,” she said. “How many groups are going to want to avenge his death? How is that going to affect our nor­mal day-to-day life? It brings me to won­der what lies ahead.”

Law­ton learned of bin Laden’s death yes­ter­day morn­ing, while get­ting her two sons ready for school. Her hus­band, Marine Capt. Gar­ret Law­ton, was killed in 2008 by a road­side bomb in Afghanistan. The boys were ages 4 and 6 at the time of their father’s death, she said. “I know that my late hus­band would have been elat­ed that our ser­vice­mem­bers had a suc­cess­ful mis­sion,” she said.

As for her sons, “Maybe they will feel some sort of peace that their dad played a part in even­tu­al­ly mak­ing today pos­si­ble,” she said, close to tears. While emo­tions seem to be run­ning the gamut from ela­tion to cau­tion, Miller has traced a com­mon thread of patri­o­tism among sur­vivors. Many peo­ple with­in the sur­vivor com­mu­ni­ty have changed their social net­work­ing pro­file pic­ture to a patri­ot­ic sym­bol or to a pic­ture of their lost loved one, she said.

Miller changed her Face­book pro­file pic­ture to a pic­ture of her brother’s tomb­stone. Army Spc. Christo­pher Neiberg­er was killed Aug. 6, 2007, in Bagh­dad. “I would hope I would nev­er cel­e­brate the death of anoth­er human being, but I do feel that jus­tice was served,” she said of bin Laden’s death. “I’m very proud of my broth­er and the mil­i­tary and all of those peo­ple who have giv­en so much. 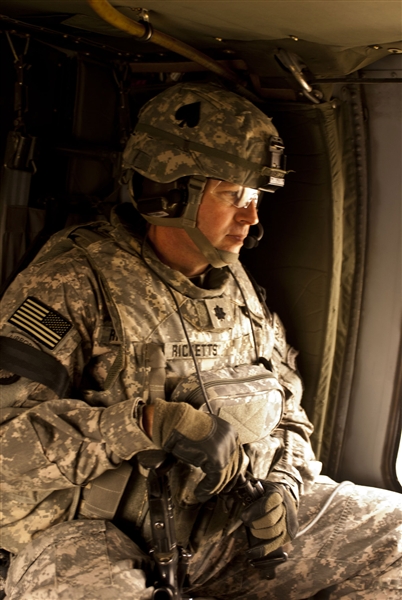