WASHINGTON, Dec. 14, 2011 — When the last U.S. troops in Iraq case their col­ors and move to Kuwait, they can leave with their heads held high, secure in the knowl­edge they did what was right for Amer­i­ca and peace in the region, Pres­i­dent Barack Oba­ma told ser­vice mem­bers at Fort Bragg, N.C., today.

Oba­ma not­ed the end of the war in Iraq dur­ing his speech to thou­sands of ser­vice mem­bers — many of whom served mul­ti­ple tours in Iraq since 2003.

The most impor­tant les­son from the war in Iraq is about America’s nation­al char­ac­ter, Oba­ma said.

That fact is why the Amer­i­can mil­i­tary is the most respect­ed insti­tu­tion in the coun­try, the pres­i­dent said.

The young men and women at Fort Bragg rep­re­sent more than 1.5 mil­lion Amer­i­cans who have served in Iraq. More than 30,000 Amer­i­cans have phys­i­cal wounds from the con­flict with tens of thou­sands afflict­ed by unseen wounds like trau­mat­ic brain injury and post-trau­mat­ic stress.

“Near­ly 4,500 Amer­i­cans made the ulti­mate sac­ri­fice, includ­ing 202 fall­en heroes from here at Fort Bragg — 202,” Oba­ma said. “So today we pause to say a prayer for all those fam­i­lies who’ve lost their loved ones, for they are part of our broad­er Amer­i­can fam­i­ly.” This 9/11 gen­er­a­tion has earned its place in his­to­ry, the pres­i­dent said.

“Because of you, because you sac­ri­ficed so much for a peo­ple that you had nev­er met, Iraqis have a chance to forge their own des­tiny,” he said. “That’s part of what makes us spe­cial as Amer­i­cans. Unlike the old empires, we don’t make these sac­ri­fices for ter­ri­to­ry or for resources; we do it because it’s right.

“There can be no fuller expres­sion of America’s sup­port for self-deter­mi­na­tion than our leav­ing Iraq to its peo­ple,” he added. “That says some­thing about who we are.”

And U.S. ser­vice mem­bers in Afghanistan are tak­ing on the Tal­iban and break­ing the back of al-Qai­da, the pres­i­dent said.

“Because of you, we’ve begun a tran­si­tion to … the Afghans that will allow us to bring our troops home from there,” Oba­ma said. “And around the globe, as we draw down in Iraq, we have gone after al-Qai­da so that ter­ror­ists who threat­en Amer­i­ca will have no safe haven, and Osama bin Laden will nev­er again walk the face of this Earth.”

Soon the last sol­diers will leave Iraq, and the achieve­ments of Amer­i­cans who fought there will belong to his­to­ry, the pres­i­dent said. He com­pared them to the men and women who fought for inde­pen­dence from Great Britain and who defeat­ed fas­cism and com­mu­nism. He also recalled the Civ­il War say­ing this gen­er­a­tion, like the one that fought for union, has been “touched by fire.”

“All of you here today have lived through the fires of war,” Oba­ma said. “You will be remem­bered for it. You will be hon­ored for it, always. You have done some­thing pro­found with your lives.”

Today’s ser­vice mem­bers enlist­ed dur­ing a time of war know­ing that they’d be the ones who went into harm’s way, Oba­ma said.

“When times were tough, you kept fight­ing. When there was no end in sight, you found light in the dark­ness,” the pres­i­dent said. “And years from now, your lega­cy will endure in the names of your fall­en com­rades etched on head­stones at Arling­ton, and the qui­et memo­ri­als across our coun­try, in the whis­pered words of admi­ra­tion as you march in parades, and in the free­dom of our chil­dren and our grandchildren.”

And they will remem­ber that they were touched by fire, and can be proud they answered the call, the pres­i­dent said. 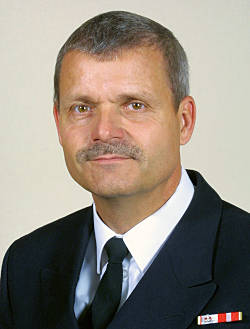