MARINE CORPS BASE HAWAII, Aug. 13, 2011 — Removed from an ambushed pla­toon of Marines and sol­diers in a remote Afghan vil­lage on Sept. 8, 2009, his real­i­ty vicious­ly shak­en by an onslaught of ene­my fight­ers, Marine Corps Cpl. Dako­ta Mey­er sim­ply react­ed as he knew best — tack­ling what he called “extra­or­di­nary cir­cum­stances” by “doing the right thing — what­ev­er it takes.”

Near­ly two years lat­er, the White House announced yes­ter­day that the 23-year-old Marine scout sniper from Colum­bia, Ky., who has since left the Marine Corps, will become the first liv­ing Marine to be award­ed the Medal of Hon­or in 38 years. Retired Sgt. Maj. Allan Kel­logg Jr. received the medal in 1973 for gal­lantry in Viet­nam three years earlier.

Mey­er is the sec­ond Marine to receive the medal for actions in Iraq or Afghanistan. Cpl. Jason Dun­ham was award­ed the medal posthu­mous­ly for cov­er­ing a grenade with his body to save two Marines in Iraq in 2004. Pres­i­dent Barack Oba­ma will present the award to Mey­er at the White House on Sept. 15.

“The award hon­ors the men who gave their lives that day, and the men who were in that fight,” Mey­er said. “I did­n’t do any­thing more than any oth­er Marine would. I was put in an extra­or­di­nary cir­cum­stance, and I just did my job.”

Mey­er charged through the bat­tle zone five times to recov­er the dead Marines and injured Afghan sol­diers, risk­ing his life even when a med­ical evac­u­a­tion heli­copter would­n’t land because of the blaz­ing gunfire.

“There’s not a day — not a sec­ond that goes by where I don’t think about what hap­pened that day,” Mey­er said. “I did­n’t just lose four Marines that day; I lost four broth­ers.” Author Bing West, a retired Marine infantry offi­cer and com­bat vet­er­an of Viet­nam, detailed Meyer’s actions in the bat­tle in “The Wrong War,” and praised Mey­er for tak­ing com­mand of the bat­tle as a cor­po­ral — the most junior advi­sor in this firefight.

West said Mey­er should have been killed, but he dom­i­nat­ed the bat­tle­field by fear­less­ly expos­ing him­self to dan­ger and pump­ing rifle and machine gun rounds into the ene­my fight­ers. “When you leave the perime­ter, you don’t know what’s going to hap­pen, regard­less of what war you’re fight­ing in,” Kel­logg, who lives in Kailua, Hawaii, said. “Once you get to a point where you make the deci­sion — ‘I’m prob­a­bly going to die, so let the par­ty begin’ — once you say in your mind you aren’t get­ting out of there, you fight hard­er and hard­er.” Begin­ning his career with the same reg­i­ment from which Kel­logg retired in 1990, Mey­er deployed with 3rd Bat­tal­ion, 3rd Marine Reg­i­ment, to Fal­lu­jah, Iraq, in 2007, and earned a mer­i­to­ri­ous pro­mo­tion to cor­po­ral in late 2008 after return­ing from the deployment.

Before leav­ing for Iraq, Mey­er com­plet­ed the Marine Corps’ 10-week Scout Sniper Basic Course, and com­mit­ted him­self to prepar­ing him­self and his snipers for com­bat. They attend­ed life­sav­ing class­es taught by Navy corps­men and honed their skills with myr­i­ad weapons sys­tems, such as light machine guns. Mey­er also spent time in his battalion’s com­mu­ni­ca­tions sec­tion learn­ing how to call for mor­tar and artillery fire.

“I devot­ed my whole life to mak­ing the best snipers in the Marine Corps,” Mey­er said. “They’re a direct reflec­tion of your lead­er­ship. If you fail them in train­ing, it could get them killed on the battlefield.”

In Feb­ru­ary 2009, Mey­er vol­un­teered to deploy to Afghanistan’s dan­ger­ous Kunar province and men­tor Afghan sol­diers as part of an embed­ded train­ing team, the type of role usu­al­ly filled by U.S. Spe­cial Forces.

“A Marine who seeks the chal­lenge of join­ing his unit’s scout sniper pla­toon has to have a lot of dri­ve and deter­mi­na­tion,” said Col. Nathan Nas­tase, com­mand­ing offi­cer of 3rd Marine Reg­i­ment and for­mer­ly Meyer’s bat­tal­ion com­man­der at 3/3. “Being assigned to the ETT was a huge vote of con­fi­dence in his abilities.”

Mey­er deployed to Afghanistan on the ETT in July 2009.

“Our mis­sion was to help pre­pare the Afghans to take over their own coun­try and pro­vide secu­ri­ty for them­selves,” Mey­er said. “ETTs make a huge impact on the out­come of the war.” In Kunar province, Mey­er and anoth­er ETT advi­sor would lead squads of 15 Afghan sol­diers on patrols. Since he could speak Pash­to, the local lan­guage, so well, Mey­er often sep­a­rat­ed from the ele­ment with his Afghan trainees.

When his patrol fought to res­cue anoth­er from an ambush Sept. 8, 2009, Meyer’s focus on advis­ing gave way to sur­viv­ing, and on what he had to do to keep him­self and his men alive.

“I lost a lot of Afghans that day,” Mey­er said. “And I’ll tell you right now, they were just as close to me as those Marines were. At the end of the day, I don’t care if they’re Afghans, Iraqis, Marines or Army; it did­n’t mat­ter. They’re in the same [stuff] you are, and they want to go home and see their fam­i­ly just as bad as you do.”

Thrown into unimag­in­able cir­cum­stances, Mey­er said the Afghan sol­diers and his sniper train­ing saved his life dur­ing the battle.

Jacody Downey is a close friend of Meyer’s from Ken­tucky. He’s seen his friend grow from a fun-lov­ing “joke­ster” in high school to a dri­ven Marine who deeply respect­ed both elders and subordinates.

“Dako­ta has always cared more about oth­ers than he does him­self,” Downey said. “Even if he’s not with his Marines now, he’s still con­stant­ly think­ing about them, wor­ry­ing about them and call­ing to check on them. He still con­sid­ers them brothers.”

“Mey­er was an ide­al leader,” Hawkins, from Park­er, Colo., said. “He knew every­thing about the Marines under­neath him — how they’d respond to every sit­u­a­tion, not only on a Marine Corps lev­el but also on a per­son­al level.”

Hawkins said he was deeply hum­bled by Meyer’s con­cern as a friend, espe­cial­ly after being injured in Afghanistan last year. Hawkins was severe­ly wound­ed by an impro­vised explo­sive device in Afghanistan Sept. 24, 2010. Four days lat­er, he lay sta­t­ic in a stark hos­pi­tal room, rid­dled with shrap­nel. After grog­gi­ly emerg­ing from anes­the­sia into a blur­ry real­i­ty, Hawkins’ phone rang — the first call from a friend. With­out fail, Meyer’s jovial drawl broke through the speaker.

“In the Marine Corps, you always hear that if something’s broke, you’ve got to work to fix it, but you nev­er real­ly see the Marine who does it,” Hawkins said. “Mey­er is that Marine. If he had some­thing to say, he’d say it, and he was­n’t real­ly afraid of reper­cus­sions for what he said. If it need­ed to be changed, he changed it.”

Hear­ing his friend would receive the Medal of Hon­or did­n’t sur­prise Hawkins. In light of the “char­ac­ter” and “coun­try boy” Hawkins knows, Meyer’s actions were sim­ply the man­i­fes­ta­tion of how he lived and led.

“Mey­er was des­tined for the Medal of Hon­or,” Hawkins said. “If you got to work with him, you’d see it.”

Mey­er com­plet­ed his tour on active duty in June 2010. He went home to Ken­tucky, where he’s found pur­pose work­ing with his hands in a fam­i­ly business.

“Pour­ing con­crete is kind of like the Marine Corps,” Mey­er said. “When you wake up in the morn­ing, you’ve got a job … like a mis­sion. There’s no set stan­dard on how to do things, but you just have to go out there, make deci­sions and get it done — and that’s like the chal­lenge of the Marine Corps. Once you’re sat­is­fied with what you’ve done, you stop get­ting better.”

Mey­er is the 86th liv­ing Medal of Hon­or recip­i­ent, and he joins a small, elite group of heroes, a real­i­ty that will often require him to con­jure up haunt­ing reminders of the bat­tles he has fought, the friends he has lost and the painful regret he bears.

“I’m not a hero, by any means — I’m a Marine, that’s what I am,” he said. “The heroes are the men and women still serv­ing, and the guys who gave their lives for their coun­try. At the end of the day, I went in there to do the right thing, … and it all boils down to doing the right thing, … what­ev­er it takes. All those things we learn stick in your head, and when you live by it, that’s the Marine way.”

Though Mey­er will receive the Medal of Hon­or for what he did in Gan­j­gal, he insists he will wear the five-point­ed medal­lion and blue silk rib­bon to hon­or his fall­en broth­ers, their fam­i­lies and his fel­low Marines.

“Being a Marine is a way of life,” Mey­er said. “It isn’t just a word, and it’s not just about the uni­form — it’s about broth­er­hood. Broth­er­hood means that when you turn around, they’re there, through thick and thin. If you can’t take care of your broth­ers, what can you do in life?” 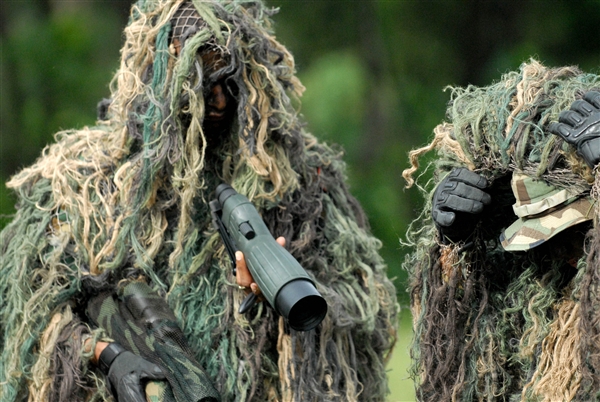 Fixing Oversight of Special Operations Forces — War on the Rocks